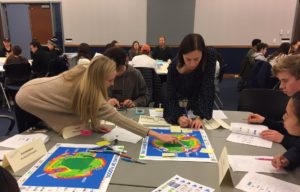 Georgetown University’s new Core Pathways Initiative is giving undergraduates a chance to address some of the world’s most complex problems while meeting their core undergraduate requirements. The university’s Designing the Future(s) Initiative launched the Core Pathway on Climate Change (CPCC) as a pilot program in 2017.

“A core curriculum shouldn’t just be about checking boxes and getting it out of the way,” says Randall Bass, vice provost for education and director of the Designing the Future(s) Initiative. “We are modeling what it looks like to take up an ethical question or to take up a complex problem from multiple different perspectives – and to do this as early as possible in a student’s career at Georgetown.”

By congregating in “integrative days,” students are encouraged to talk about the different disciplinary perspectives they’ve learned and gain access to global climate leaders. STIA Professor Joanna Lewis has helped to coordinate the integrative day experiences which have ranged from policy simulations to engaging with climate leader Al Gore.

Lewis led students in a “Game of Floods,” a simulation about adapting to sea level rise modeled after a game developed by Marin County, California. She also moderated a question and answer session between Georgetown students and Former Vice President Al Gore, who spoke in Gaston Hall.

“I’m grateful to be involved in such an important initiative,” says Isabel Paret (C’20), a government and Spanish major of Larchmont, New York. “It’s cool to be a part of something so transformative to Georgetown’s traditional curriculum, but also something with such weighted themes.”

All the students in the program engage in issue-based simulations, have opportunities to address public policy and advocacy, attend events and participate in a robust community of practice comprising faculty, staff and peers.